Have you ever seen a UFO?

Flying Saucers from Beyond the Earth: A UFO Researcher's Odyssey 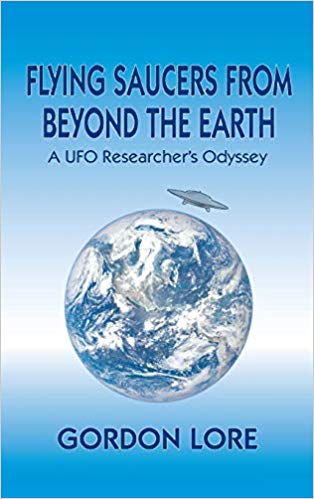 The bulk of Gordon Lore’s latest book is a compilation of summaries describing apparently every UFO sighting reported to the National Investigations Committee On Aerial Phenomena (NICAP) from 1956 to 1980. During that time, Lore served as Vice President, Assistant Director, Secretary-Treasurer and investigator for NICAP, then the world’s largest UFO organization.

The summaries don’t stop there. While Lore focuses on sightings in the continental U.S. in his first chapters, he also presents sightings and close encounters internationally, at sea, and in the air up to the present day.  In fact, just before the appendices begin, Lore closes his journey by providing readers with a website and e-mail address where they can report new sightings in the future.

Lore’s approach is both objective and personal. Objective in that he rarely editorializes on the credibility of UFO spotters other than frequently noting scientists, two presidents, police officers, astronauts, military personnel and many other believable folks claimed to have seen unidentified flying objects near their homes or job sites. Credibility for many such occurrences is underlined when numerous witnesses reported what they saw at the same time and same place. Lore also shows how the U.S. military and government engaged in a long and often silly cover-up of UFO sightings by giving the public usually implausible explanations of how UFO phenomena could be explained away. Lore doesn’t have to add any commentary on any official agency’s lack of professionalism or believability. Instead, he lets the facts stand for themselves.

The odyssey is personal in that Lore was on the inside of UFO explorations for several decades and worked with the most eminent researchers in the field, appeared in Congressional hearings, and advised Stanley Kubrik while 2001: A Space Odyssey was being filmed. So he is able to provide portraits of many of the key figures involved in NICAP during its heyday and afterward.

One perhaps irrelevant question I have is, just how much of this book is new material? In addition to the numerous articles and special reports Lore either wrote, co-wrote, or edited over the years,  his past books include Mysteries of the Skies: UFOs in Perspective, Strange Effects from UFOs and UFOs: A New look. Of course, if you’re a reader who’s read none of Lore’s previous work,  his Flying Saucers tome will be new to you, just as it was to me. I rather suspect Flying Saucers may well be Lore’s culmination of all his UFO work, pulled together in a grande finale.

I admit, before reading this book, I was willing to accept the possibility that alien visitors had come to our earth. I’m now convinced they have.  Many, many times. I’m still amazed how these visitors haven’t made any noticeable effort to communicate with us.    Why come all this way just to fly around and check things out? Well, those aren’t the sorts of questions Lore addresses. His purpose is to establish we’ve been getting visits on numerous occasions that defy any explanation other than we are not alone in the universe.

This review first appeared at BookPleasures.com on Sept. 6, 2018: