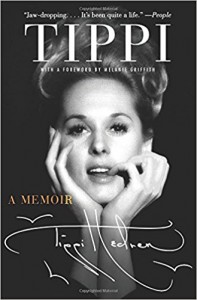 Back in Feb. 2012, I had the opportunity to interview actress, humanitarian, and animal rights activist Tippi Hedren for online radio’s “Dave White Presents.” At the time, she was touting The Girl, an HBO/BBC film about Hedren’s relationship with Alfred Hitchcock in which Hedren was played by Sienna Miller.

To my surprise, Hedren never mentions The Girl in her new memoir, although she devotes several inevitable chapters to her involvement with the director who discovered her when he saw her in a commercial and then cast her as his leading lady in 1963’s The Birds and again in the following year’s Marni opposite Sean Connery. As she’s been saying for years, Hedren again expresses her gratitude for all Hitchcock taught her about the movie business while discussing his obsessive sexual harassment and stalking of her before threatening to ruin her career for not yielding to his advances. It’s likely most readers will pick up Tippi looking for insights into The Birds, Marni, and Hitchcock as these are the subjects she is most known for. However, few readers will glean any new revelatory details on these matters as they’ve been covered in countless sources before.

What is likely to most interest those who don’t know the story is Hedren’s epic eleven-year quest to make the film Roar (1981) with her then husband, Noel Marshall. In 1969 while she was shooting two films in Africa, the couple was introduced to the plight of African lions. Soon, the Marshall’s started bringing lions, lions, more lions, cheetahs, and tigers into their Hollywood home in preparation for the movie they wanted to make to spread awareness about endangered African wildlife.

The lion’s share of the memoir deals with Tippi’s life with the lions which became more than one private home could handle. Ultimately she created the Shambala Preserve to house the more than 150 animals used in Roar which grew to include any abandoned wild felines that had no other place to go. During the making of the film, many of these animals were almost lost in a ravaging flood and later surrounded by California wildfires. The section on the flood and the quickly assembled rescue of the animals is without doubt the most exciting passage of the book.

Gratefully, Tippi is not a name-dropping Hollywood tell-all, and those looking for much about the movie business won’t get much of what they seek. Readers will see little about her short time working with Charlie Chaplin on the Countess from Hong Kong and less on later film and TV appearances other than her pleasure at appearing on The Bold and the Beautiful. Admittedly, most of her roles were either in low-budget films or one-off appearances on television series used to raise money for her causes. For me, the biggest surprise was the Marshall’s efforts to get Peter Blatty’s The Exorcist into print and their having to wait for years to earn their well-deserved percentages of the book and film version.

Instead, the memoir covers one woman’s odyssey from a girl who hoped to become a figure skater turned model turned actress and the mother of Melanie Griffith and grand-mother of Dakota Johnson. Griffith fans may marvel she survived child-hood with all those dangerous beasts literally prowling into every room in her house. Along the way, we see Hedren taking on humanitarian efforts like entertaining the troops in Vietnam, taking overseas tours on behalf of Feed the Hungry, becoming the God Mother of the modern Vietnamese Nail Industry, and her efforts to push Legislation through Congress for the protection of wild animals in captivity. She shares much about her personal life, like the accident that took away her senses of smell and taste and the constant headaches she’s been enduring for years.

From beginning to end, a very personable and vivacious personality shines through the triumphs and struggles, and we meet a very independent and strong-willed lady whose self-confidence rarely lags even when things seem very dark, especially in the later ‘70s when her second marriage and film work hit the bottom. It’s hard not to root for a courageous woman who isn’t self-absorbed but rather deeply concerned for her family, refugees, and of course her beloved big cats. Bull elephants, too. One indication of what matters to Tippi is the appendix which lists an impressive catalogue of awards and honors, but there’s no filmography.

In short, this is more than a readable autobiography, especially if you don’t need wall-to-wall star-studded anecdotes of Hollywood’s yesteryears. Tippi Hedren herself is more than worth the price of admission. Perhaps you’ll be inspired by her wisdom and sage advice and be moved to join in with her animal rights projects.

You can hear Wes Britton’s Feb. 29, 2012 audio interview with Tippi Hedren archived for download at:
http://tinyurl.com/87lxu8o


This review first appeared at BookPleasures.com on Oct. 27, 2016 at:
goo.gl/uWGnfY