The Conundrum of the Decapitated Detective (The Hugh Kerr Mystery Series) 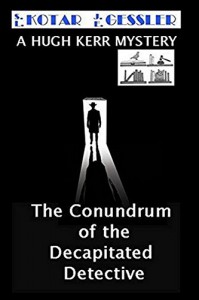 The Conundrum of the Decapitated Detective is a return to the thrilling days of noir mysteries set in the 1950s. It was a time when people still checked out phone booth coin slots hoping to find loose change, when phone numbers began with words like “Metropolitan,” and when Saturday morning TV was all cartoons. In this novel set in 1955, attorney Hugh Kerr and his secretary, Ellen Thorne, investigate whether or not a dismembered corpse belongs to their longtime private detective friend, Jack Merrick. The story is a bit like what Perry Mason and Della Street might have done if Paul Drake had disappeared.

This isn’t to say S.L. Kotar and J.E. Gessler are Earle Stanley Gardner imitators. For one thing, we aren’t told whether or not plucky Ellen Thorne has shapely legs or not, a detail Gardner wouldn’ have neglected. On the other hand, like Mason, Kerr tends to pace around his office, has no problem with illegal breaking and entering or withholding evidence, and doesn’t like to cooperate with the police or district attorney. With good reason. Then again, Hugh and Ellen’s relationship has a tad more physical and emotional ardor than Perry and Della ever shared. Mason didn’t cheat at Solitaire like Kerr. Most importantly, Kerr doesn’t have a client—he’s the one running from a death threat. And there’s no dramatic courtroom scene where a defense attorney can show off their surprising revelations. We never see Kerr in court at all.

In a very real sense, this novel continues to broaden the literary scope of S.L. Kotar and J.E. Gessler who’ve written TV scripts (Gunsmoke), non-fiction books on steamboats, ballooning, and cholera, as well as Westerns and romance novels (The Hellhole Saga, Kansas Pirates Saga). With this track record, again, it wouldn’t be fair to diminish the cast of The Conundrum of the Decapitated Corpse as mere clones of Earle Stanley Gardner’s immortal players. But readers who like those types of classic, if contrived, stories of gumshoeing detective work should enjoy the first of this new series.

Even if you’ve never picked up an Earle Stanley Gardner mystery, Conundrum should appeal to modern readers with a taste for old-fashioned if roundabout plots. I admit, the book seems a bit padded with a long section on the road where little happens, one interrogation scene is extremely repetitive, and the so-called criminal charges leveled at our heroes are based on the flimsiest of circumstantial evidence. But these foibles are typical of this literary tradition. It’s the characters and reader interest in them that matter. Oh, if we don’t learn whether or not Ellen Thorne has nice legs, we’re told her mother does. With such genes, I’m certain Kerr’s Girl Friday has great gams just like her literary predecessor, Della Street.