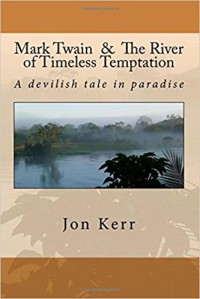 As if the life and work of the historical Mark Twain doesn’t provide enough fodder for countless literary and film adaptations, Samuel Clemens has been used by a seemingly endless parade of authors, artists, and filmmakers who send him to more and more fantastic places where he has more than improbable adventures. In comics, Twain was teamed with Nikola Tesla to defeat the evil plans of Thomas Edison, and in Star Trek: The Next Generation, Twain took on the crew of the time-travelling crew of the Enterprise. In the stop-action claymation Adventures of Mark Twain (1985), along with a number of his characters, Twain, split into two parts, captained a fantastic airship to travel to Halley’s Comet. In 1971, Philip Jose Farmer transported Twain to Riverworld in The Fabulous Riverboat where Twain battled, among other formerly dead souls, England’s King John. There are many novels in which Twain lives in alternate realities as when Sesh Heri sent Twain, Harry Houdini, and Nikola Tesla on a journey to Mars in 1893. And that’s just a short list of Twain’s appearances in sci fi projects. Just last month, he figured prominently in The Grandfather Paradox: A Time Travel Story by Steven Burgauer.

Now, John Kerr joins this Twain/sci fi/fantasy mash-up procession by having Twain in the watchful gaze of young Satan, the nephew of Lucifer. The devil’s nephew, calling himself Mr. Brown, is the narrator of the story as he takes “Sammy” around space in time in the quest to get Clemens to sign on the dotted line and give the demonic family his soul. Brown claims to be the one giving Clemens inspirations and story ideas, beginning with the author’s breakthrough short story, The Celebrated Jumping Frog of Calaveras County. The demon has few compliments for Clemens, noting the writer’s many annoying personal complaints and shifting perspectives on moral issues and philosophical ideas. It’s interesting Brown would be so focused on Twain as Lucifer’s minions are constantly busy manipulating the world, especially geopolitical concerns.

In the opening chapters, for example, Twain has been transported to Central America before the Civil War where several actual historic figures, William Walker and Cornelius Vanderbilt, vie for power in Nicaragua. While still on the San Juan river in that country, Brown takes Twain further back in time where they are captured by a young Captain Horatio Nelson, then pirate Henry Morgan, and then Christopher Columbus. Along the way, Brown is constantly worried about violating his uncle’s Prime Directive, that of not altering the existing timeline. It’s often Twain who complicates this matter because of his confusing comments and anachronistic observations uttered in front of figures from the past, unintentionally suggesting actions that Brown knows these personages must not take.

Then, the book abruptly shifts gears and presents Twain’s original account of his actual Nicaragua trip which he described in a series of letters to the Alta California newspaper in 1867. These letters came out in book form in 1940 titled Travels with Mr. Brown, the inspiration for Kerr’s fantasy. The original Mr. Brown is largely considered an imaginary character who Twain described as a boring, irritating travel companion. Beside the time travel passages, much of Kerr’s material is lifted directly from Twain, merely given a different narrative slant. Notably, Kerr’s Mr. Brown is obviously speaking from a contemporary point-of-view, mentioning the internet, K-Marts, Walmart, and Woodstock. Still, while Kerr admits “any plagiarism is entirely intentional,” one wonders if he has the permission to publish so much of Twain’s original work.

The first half of Timeless Temptation is clever and quirky, even if readers are left hanging in terms of what Mark Twain’s future with Mr. Brown and Satan will be. For Twainians and those interested in forgotten chapters of American literature, the book might prompt curiosity about a part of the Twain canon that’s rarely discussed or read. In short, this odd book is for a niche market willing to accept some unorthodox spins on the biography of Mark Twain.

This review first appeared at BookPleasures.com on March 8, 2017 at:
goo.gl/kvMxGm