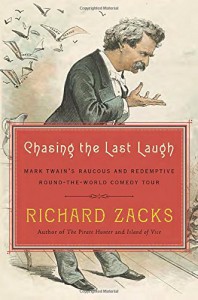 Without question, Richard Zacks’ richly detailed research will mainly appeal to Mark Twain enthusiasts. That company includes me. But you don’t need to have a background in Mark Twain studies to find this travelogue a fascinating read.

The story begins in the final decade of the 19th century when Mark Twain found himself bankrupt largely due to his investments in a troublesome typesetting machine and the disastrous Charles Webster publishing company Twain owned. Enter millionaire Henry H. Rogers who does his best to dig Twain out of the quagmire. But Twain’s wife Livy insists on all debts getting paid back dollar-for-dollar to uphold her family’s reputation. To meet his obligations, Twain is forced to go on an around the world lecture tour to raise the funds.

While I certainly haven’t read all the previous books on the Clemens’ family journeys in 1895-1896, I always thought that Twain endured the journey as an unrelenting ordeal but Zacks convinced me that impression is an oversimplified response to what happened. True, the family suffers from ailments and unpleasant and sometimes dangerous travel conditions from time to time, but Twain benefited from the experience in many important ways. While he frequently complained about taking to the stage, Twain bathed in the affectionate responses he got from audiences across the United States, Australia, New Zealand, and India although his anti-racist readings didn’t fare well in South Africa. The sight-seeing, including visits with many interesting dignitaries, especially in India, made for a tour anyone would envy, especially as Twain was treated far more like a triumphant prince and not a beleaguered pauper. And the fact he set out to do this at all earned him good press which enhanced his already august reputation considerably.

I admit, much of the day-by-day minutia is not all absorbing reading, although we get to experience what Twain thought and see what he saw. Not all readers need a dollar-by-dollar accounting of just who Twain’s creditors were and what hoops Twain leaped through to accommodate them. On the other hand, Twain’s attraction to India is extremely interesting as we encounter the exotic, colorful carnival that Twain witnesses from regal potentates to fakirs and beggars on the streets. For my money, Zacks provides a valuable service with his historical overviews that provide deep contexts for the places the Clemens went and some of the people they met.

There’s considerable humor, as you might expect, along the way. That includes generous samplings of the stories Twain used in his presentations along with many bits and pieces from his notebooks and letters. The perspectives also include passages from correspondence from Livy Clemens and their daughter, Clara. The result isn’t just a tracing of the tour’s route until the tragic news of daughter Suzy’s death in August 1896, but a very well-done and balanced portrait of the complex author and his family relationships.

If you want cover-to-cover entertainment, start with Twain’s own Following the Equator, his under-appreciated if uneven 1897 account of the tour. But Zacks’ study is also worthy of appreciation for what he has added to studies of the life and literature of the justly lionized Mark Twain. Chasing the Last Laugh isn’t for everyone, but it should be on many a bookshelf of those interested in 19th century American literature and history.