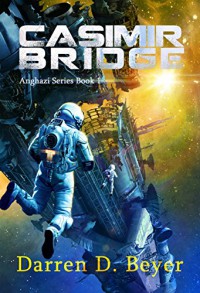 I’m not embarrassed to admit it. I hadn’t read very far into Casimir Bridge, the debut novel from newcomer Darren Beyer, before I realized I’d just found my newest favorite sci-fi author.

Such elation doesn’t happen very often for me. In this case, I had been drawn into a very fast-paced, richly described, and multi-layered saga with vividly sketched and engaging characters. In particular, we meet three pivotal characters whose parallel trajectories are juxtaposed against each other throughout the story.

There’s Jans Mikel, the CEO of a vast interplanetary corporation that’s found the ways to make inter-Steller flight much faster. There’s Mandi Nkosi, a reporter who becomes aware of a conspiracy that involves a rival corporation and a not surprisingly corrupt government. It’s willing to use nuclear terrorists to instill fear in earth’s population. The leader of that conspiracy is Gregory Andrews, a classic villain willing to pay any cost to take away a rare element from Mikel and gain the power to literally rule the universe. Along the way, there’s no shortage of important secondary characters that provide depth and key moving parts in the environs of Mikel, Nkosi, and Andrews.

Yes, there are many aspects of the book that qualify it as a thriller. At the same time, the yarn is infused with many aspects that put it in the realm of “hard science fiction.” That shouldn’t be surprising as the author is a former space shuttle engineer who worked on numerous Shuttle missions, including the Hubble Space Telescope. In addition, Beyer claims he conducted many interviews with fellow experts to make the details as realistic as possible. The only noticeable omission in this realism is any explanation of the element Hyperion, the magic ingredient that everyone seeks to control.

For those who like comparisons with established authors, I was reminded of the equally complex series by Jack McDevitt and Kristine Kathryn Rush. I have only one complaint. The cliff-hanger ending is so abrupt I cursed to realize I was going to have to wait awhile to see what will happen next.

Kasimir Bridge is the first of a trilogy set in 2108, and I fear it might feel like 2108 before I get my next dose. Welcome to my new addiction. If you like intelligent, well-crafted sci-fi, it may become yours as well.

Written by Wesley Britton for BookPleasures.com
Author, The Beta-Earth Chronicles