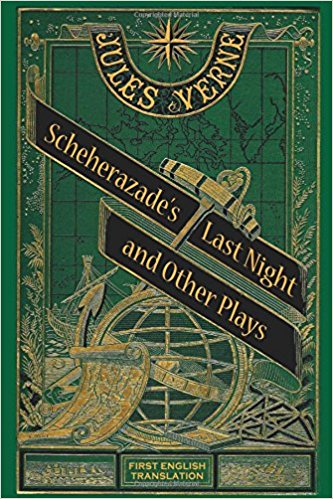 For many years now, the North American Jules Verne Society has been offering English-speaking readers long overdue translations of Verne works previously only available in the author’s native French. Of course, many potential readers of these translations know Verne best for his ground-breaking sci fi adventures like Twenty Thousand Leagues Under the Sea, The Journey to the Center of the Earth, From the Earth to the Moon or other high-adventure novels like Around the World in Eighty Days, The Mysterious Island, or Five Weeks in a Balloon. As a result, most of the 11 volumes of the Society’s Palik Series are full of material likely to interest Verne scholars and aficionados, but probably few general readers. This is especially true as most of the plays and stories were written in Verne’s youth and are more traditional fare of the era. Then again, the series has given us, so far, the long overdue translation of the 1874 stage version of Around the World in Eighty Days. Volume 2 of the series, “Shipwrecked Family: Marooned with Uncle Robinson” morphed into Mysterious Island. In Volume Seven, Bandits and Rebels, Verne’s “San Carlos” presents a Spanish smuggler who used a submersible to evade authorities a decade before Captain Nemo piloted The Nautilus in Twenty Thousand Leagues Under the Sea. Now, the eleventh publication in the series presents three Verne plays translated by Peter Schulman. Each have their own charms for those looking to possibly find insights and foreshadowings into Verne’s more substantial works. I’m not familiar enough with the Verne canon to see direct lines between any of these plays and Verne’s later fiction, but those in the know may well find elements from these early plays that are developed in the more mature novels. “An Excursion at Sea,” for example, is certainly reminiscent of similar romps from Gilbert and Sullivan, most notably “The Pirates of Penzanze.” There’s a healthy streak of humor in Verne’s story of two lovers, a character in disguise, and a ship of would-be pirates and smugglers. Hmm, maybe the links between this play and Captain Nemo and company are more overt than I first suspected. The collection’s title story, “The Thousand and Second Night” is a character study of a stubborn Sultan who insists on yet another bedtime story even as his storyteller has hit a potentially fatal writer’s block. Is there some unexpected plot twist that will let Scheherazade live? For my money, the most interesting play in the trio is “Le Guimard,” in which we meet an artist involved in an art contest in Rome. He’s in love with a seductive but crafty model while a dancer has her eye on him. In this love triangle, we hear some rather interesting dialogue on the meaning of art and life. After all, dialogue is what these plays are all about as we get minimal description beyond the scant stage instructions. Again, these plays are mainly going to entertain Verne experts and likely scholars of 19th century French literature, especially drama. Peter Schulman’s introduction is clearly written for the most serious of readers, the sorts of folks who want their footnotes and scholarly apparatus reliable and thorough. Sci fi buffs aren’t going to see much that would connect this collection with that particular genre, but it is interesting for us non-specialists to learn about the depth and breadth of Verne’s creative scope. And, as many previous reviewers have noted, these plays also demonstrate Verne’s humorous side in ways we didn’t see in the more popular novels. Verne can still entertain us without putting us in hot air balloons, submarines, or rocket ships to the moon.

This review first appeared at BookPleasures.com on Feb. 21: http://1clickurls.com/NS4bnw2