Why And How Texas Will Leave The Union

Texit: Why and How Texas Will Leave the Union 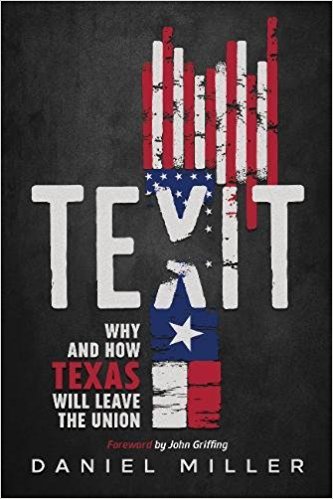 I lived over twenty years in Texas where I earned both my masters and doctorate degrees.   My father grew up in West Texas and then lived over thirty years in Dallas. While my Mom grew up in Arkansas, she too lived in Dallas with Dad until her death in 2015.  Most of my extended family, both maternal and paternal, have lived in Texas for decades.

I say all this because author Daniel Miller implies talk of Texas independence has been part of Texas culture for a very long time.   First I heard of it.  True, from my childhood on, I’ve known many Texans who have a very strong pride in their state to colorful extremes. One of my Dad’s books he got sometime in the ‘30s or ‘40s was called Texas Brags, a collection of things distinctively Texan.

But Daniel Miller, president of the Texas Nationalist Movement, goes beyond all that.  In his view, I shouldn’t be surprised I haven’t heard much about Texas independence as he believes the majority of Texans who would like to secede just don’t talk about it. He preaches secession and his case isn’t based on an exaggerated sense of state pride but an astonishing range of documentation and research.

Part of his thesis is that the Federal Government is over-reaching, bloated, wasteful, and Texas could do very well without it.    He believes the Federal government has strayed very far away from its fundamental principles. He preaches a dogma most conservatives, in any state, would agree wholeheartedly with. In fact, you don’t have to be Texan to get into Miller’s world view. He thinks secession is a universal concept for anyone craving independence, freedom, Self-determination and self-government. After all, he writes, State governments are essentially sub-divisions of the Federal government which would be more responsive to citizens if they untangled themselves from Washington bureaucracy.

Perhaps the most convincing part of the book is his plan for a gradual move to state independence, not some radical instantaneous break from the union.  First, a statewide referendum needs to take place to demonstrate the will of the people.  Then, a period of adjustment would move the state from inter-dependence on the U.S. into becoming a new nation.  He says Texas already has everything it needs to be self-sufficient. The new government would have to figure out multi-lateral treaties and determine ownership of Federal properties like military bases and arsenals.

I have to admit, while much of his book is chock full of facts and figures, Miller Makes a number of assumptions and generalizations as to why those Texans who would prefer independence can’t get politically organized. I wonder about all the citizens who weren’t Texas born and consider themselves patriotic Americans.

Texit expands on the themes of Miller's first book, Line in the Sand (2011), which addressed the roots of Texas Nationalism and the practical implications of national self-identity for Texans. Miller’s controversial books and media appearances certainly deserve serious attention as he presents a well-thought-out case despite some global generalizations about what Texans think and want.       Still, he isn’t just some spokesman for a minor fringe element in Texas who just blogs his ideas for anyone interested.

This review first appeared at BookPleasures.com on June 4: