Political Satire with some Scifi thrown in.

The premise of Fools of Parody is established when a spaceship lands on earth bearing two powerful, god-like aliens, Anu and Matrona. They’ve been to earth before, helping shape the evolution of life here but haven’t stopped by for two thousand years. They are very unhappy with how humanity has turned out and have decided we have nine months to clean up our act. Or else.

They claim humanity is the only alleged “advanced” species in the galaxy that doesn’t embrace unconditional love and joy.  They’ve sent us a series of messengers to teach us, including “the fourteen Dalai Lamas, Muhammad, Martin Luther King, Jack Robinson, RosaParks, AbrahamLincoln, Benjamin Franklin, Albert Einstein, Gandhi, Marie Curie, Stephen Hawking, Nikola Tesla, Susan B. Anthony, Mother Teresa, Be-nazir Bhutto, Leonardo da Vinci, Emily Dickinson, Walt Whitman, Maya Angelou, Nelson Mandela, Langston Hughes, Shel Silverstein, Oscar Wilde, and the list goes on.” Now, they’re collecting seven contemporary humans to try to teach us how to get past our drive to separate ourselves into all manner of conflicting groups that can’t seem to get along.  Perhaps dolphins or eleven other species might be better at being the dominant species on earth?

Along the way, we meet characters like Major Delia Coulinbaugh, aliens with different agendas from Anu and Metrona,  as well as humans with alien DNA. To say more opens the door to potential spoilers. Suffice it to say the cast of characters and unpredictable events broaden the canvas in a number of surprising ways.

The humor of this book isn’t present on every page. Long sections read as more-or-less straight-forward narratives and expositions. Still, in the early pages we read a series of penis jokes. Shel Silverstein as an agent of love and joy? FBI agent Doxy Sculder has a name that’s a mash-up of the leads in the X-Files, Dana Scully and Fox Mulder.  A drug kingpin named Floyd Maybury?

But, for me, much of the alleged humor gets lost in the complexity of the stories and the actions of a growing cast of characters whose motivations and relationships aren’t always clear.   On the other hand, all the plots and sub-plots contribute a lot of suspense to the tale, which is the main element that kept me turning the pages. This is a book that demands close attention as you go along, which isn’t a bad thing. It’s quite a trip Moses takes us on, or should I say trips? You decide. 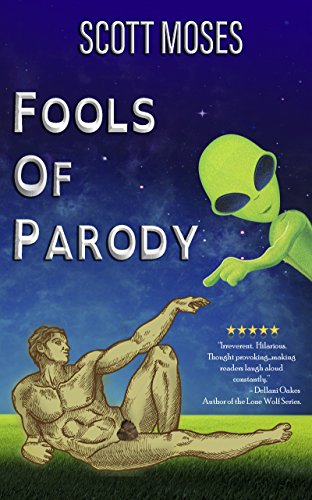