Andy Zack is to have a healthy sense of humor and the willingness to travel to a world that never was and never will be.

Paranormal Privateers: The Adventures of the Undead (Life After Life Volume 3)

Paranormal Privateers is my third go-around with author Andy Zack.  First, I read his bizarre Zombie Turkeys (How an Unknown Blogger Fought Unkillable Turkeys) (2016).  Next came My Undead Mother-In-Law (The Family Zombie with Anger Management Issues) (2017). As the titles suggest, Zack’s world of zombie animals and people aren’t meant to terrify readers. Instead, Zack is out to amuse and entertain us with the most unusual situations and scenes most of us will ever experience on the printed page.

Paranormal Privateers continues the weirdness with a handful of returning characters and the type of zombies few of us would want to kill, destroy,  or dismember.  They’re, for the most part, super-heroes with superior strength, resistance to diseases like cancer,  and the ability to regenerate limbs and other body parts.   These zombies don’t want to lose these abilities so they carry around vials of infected blood to make sure they have the means to become a zombie again in case somebody cures them.

This time around, a crew of zombies has a presidential commission and a super-yacht to take on missions the U.S. Military can’t.    Their leader is the impatient Diane Newby, the “Undead Mother-in-Law” of the previous volume. She fiercely leads her comrades as they battle Somali pirates, Crimean human slavers, and London terrorists in Harrods department store with the aid of huge zombie bulls. (Talk about a bull in a china shop!) then, a more serious scenario pulls together three storylines as the zombie team infiltrate a North Korean nuclear facility. One of these storylines centers on a North Korean defector who first becomes a zombie, then a Christian, and then he does his best to spread both in a prison camp.

Along the way, the heroic zombies and their human allies must suffer with the schemes of Sid Boffin, a 120-year-old criminal genius who wants to rule the earth and destroy all zombies with viruses carried on fly feet. Despite his efforts, Diane and her group fight on even after losing their zombie strength and regenerative abilities.

And then . . . we get an alien spaceship bringing powerful aliens to earth. It’s almost a completely different book from that point forward, beginning about 2/3 of the way in Paranormal Privateers.

All three volumes of the “Life After Life” series so far are fast-paced romps with minimal character development full of quirky humor and off-the-wall satire. While not billed as YA novels, I see no reason why young adults wouldn’t especially enjoy these yarns. There’s much about blogging, Skype, and other contemporary matters throughout all the adventures. How about a Kickstarter campaign to fund a cure for the anti-zombie virus? Political correctness? Say “paranormal people,” not “zombies.”

No reader needs to read the previous books to jump into the action, although it wouldn’t hurt to read My Undead Mother-in-Lawfirst to get some character background. But all you need to get into the quirky world of Andy Zack is to have a healthy sense of humor and the willingness to travel to a world that never was and never will be.

This review first appeared at BookPleasures.com on Aug. 6, 2018: 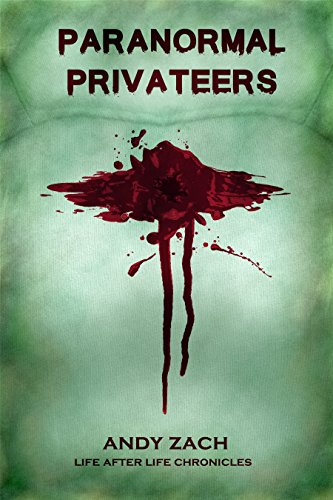