I was delighted to meet author Dennis Royer at a local writers’ conference this August. I was intrigued to hear his description of his latest Perry County novel, Flash Friends, as that’s the locale where my stepson and my grandson live. I was curious to hear that one of his main characters is blind. So am I.

With these connections in mind, I bought one copy of the book for my grandson and asked Dennis to send me an e-book version so I could write this review.

In short order, I was feeling mixed messages, to mangle one usually tried and true metaphor. In many ways, the character of the blind twenty-two-year-old blind character, Annalise DaVinci, was very believable. Her resentment of anyone or anything that frustrated her proud independence is something I’ve seen many, many times. On the other hand, I couldn’t figure out why she wasn’t using a white cane, especially as she was living out in the boondocks and apparently taking long walks in the country. Without a cane?

True, Royer tells us Annalise doesn’t use her cane to look less conspicuous. As the story progresses, we get more and more clues about Annalise’s past from which she is running and hiding.  Still, not using a cane, or guide dog and just relying on the apps in her cell phone, I can promise you, is dumb. And dangerous.

In short order, fire companies from all over the region descend on the blaze and one firefighter dies of a heart attack at the scene. This leads to a number of investigations of the incident where various law enforcement agencies view Bo, Annalise, and the Johnsons with suspicion. Why? And what is Annalise afraid of? Who is she hiding from?

As the story progresses, I realized Royer is extremely good with character development, offering very believable emotions, motivations, and actions by all his leading and supporting characters. He’s also very good at distributing clues and foreshadowings of several mysteries he’s developing. I was more than surprised by the final third of the book where most readers who know this area will be amazed to see Perry County in this light.

I also realized Flash Friends is an ideal YA novel, and likely too the rest of his Perry County stories. The rural setting is vividly sketched, especially the Camp dairy farm where Bo’s father is concerned his son won’t follow in his footsteps into the family business. The area described around West Perry County, not surprisingly, is clearly drawn from the author’s personal experience. On the other hand, I know Mechanicsburg doesn’t have a store selling adaptive technology for the disabled and there’s no such thing as a Dauphin County School for the Blind.

Of course, the book is fiction so poking holes into the verisimilitude regarding the Central Pennsylvania blind community isn’t really fair, especially as the reader would have to really have specific knowledge to know about such details. Right now, I’m eager to find out what my grandson thinks of the book. I’m also curious to find out what readers think who know little or nothing about this area. Let me know—

This review first appeared at BookPleasures.com on Aug. 15, 2018: 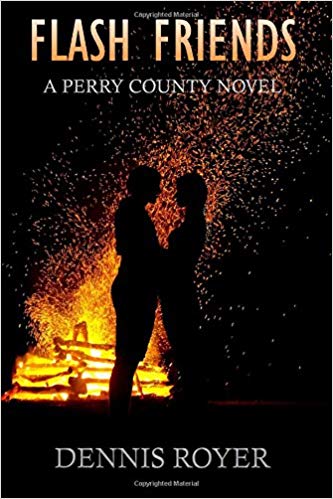