The Siege of Troy: A novel

Translated from the Swedish edition by Marlaine Delargy

It's been decades since I read Homer's The Iliad,  so my memory of it is extremely dim. I remember many of the stories, the abduction of Helen, the famous Greek warriors who besieged the city of Troy for 10 years, the use of poetic devices like the opening "Invocation to the Muse," the long descriptions of soldier's armor, etc.

Now, Swedish author Theodor Kallifatides has re-imagined the Iliad for modern readers and I suspect most non-scholars of Greek literature are going to prefer the new version. For one matter, all the poetic devices are stripped away and replaced by a much simpler prose narrative. For another, Kallifatides created a framework for his retelling that has a Greek schoolteacher recounting the story of The Iliad day-by-day to one of her classes during World War II when airstrikes repeatedly forced the class to run to nearby caves for protection.

The 1940s set part of the novel includes an ongoing love triangle as well as interactions between the German occupiers and local citizens. I'll confess, I was drawn into this story as much as the retelling of events in ancient Troy. It's a fresh approach even if the two storylines don't really parallel each other.

In regards to the old, old stories, I had forgotten just how bloody the war was. I was often surprised by the number of combatants. That many warriors, on both sides, dying in droves and droves? Seems historically doubtful, but I could be wrong.

I had also forgotten just how Achilles was a stubborn, selfish, and petulant figure. I didn't know his death by way of an arrow in his heel is not a story in the Iliad and thus not in The Siege of Troy either. The same is true of the Trojan Horse episode which wasn't told until Virgil's Aeneid. I didn't know that either until I did some homework to see why things in Homer's poem weren't in the Kallifatides reworking. Well, Kallifatides turns out to be a very faithful adapter of the ancient stories although he left many things out, mostly descriptions of the various armies and the quarrels between the gods which appear much less frequently in The Siege of Troy.

Author Theodor Kallifatides is actually Greek but immigrated to Sweden where his works are first published in Swedish. The Siege of Troy is his second work Translated by Marlaine Delargy, the first being the 2018 Another  Life. Sounds like a book I would like to explore as The Siege of Troy was one of my favorite readings of 2019. Hopefully, for you too.

This review first appeared at BookPleasures.com on Sept. 25, 2019: 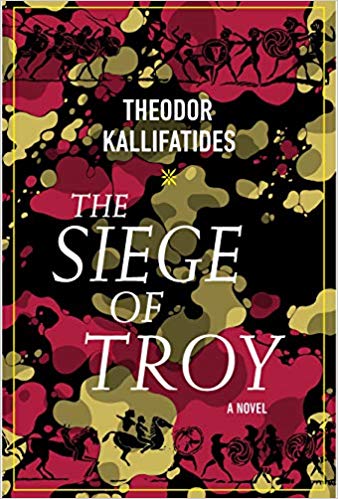